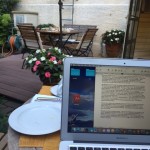 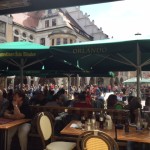 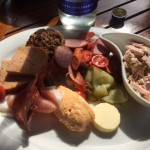 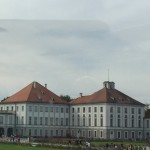 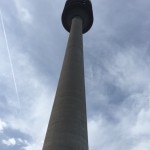 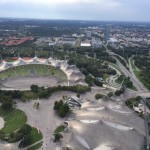 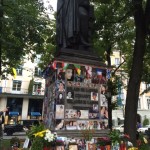 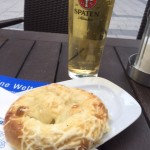 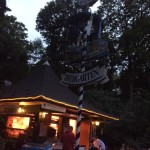 Sunday morning, I woke up at 10am.  The sister went even longer.  We are slowly but surely accumulating to the new time zone.  I woke to church bells ringing which continued to happen all day and with no particular regularity.  There was a heated bell off between 5:37pm to 6pm in the city centre.  We followed the sounds to the area and determined the steeples in the battle of the bells.  Still, we couldn’t decipher the reason behind the bell serenade.

The morning started out lovely with breakfast at the Splendid-Dollman.  I sat on the terrace to do some writing.  Unfortunately, the coffee is terrific! I’m drinking too much of it which does not bode well for my sleep tonight.

We lazily got a mid afternoon start with lunch at Orlando.  I ordered the ‘Bavarian Snack‘ which was a meat-fest; chicken liver, chorizo, bologna salad and other various sausages.  It had some cherry tomatoes, pickles and cheese spread.  I tried everything but it just didn’t live up to the specialty hype.  I had to snag some sausages and kraut off Jenny’s plate.  Here’s a little Munich tidbit I’ve noted; cafes are set up with chairs facing out to the street, not facing each other.  The people watching is encouraged.

We decided to take another bus tour to hit Olympic Park.  It was “the site of the 1972 Olympics where Mark Spitz won 7 gold medals and international terrorism was born” according to our tour guide.  It was formerly an airport that was shut down in 1939.  And it’s right next to the BMW (Bavarian Motor Works) plant. BMW was originally formed to make engines for planes that’s why their logo is a propeller.

The main attraction at Olympic Park is this massive tower, Olympiaturm.  We rode an elevator of 182 stories for the panoramic view.  It was a cloudy day but we could make out the Alps in the distance.

Before we hit the Olympics, we did a drive by to one of the palaces, Schloss Nymphenburg.  It’s massive.  This picture is just half of it.  This bus tour via Graylines wasn’t the best.  For one, 2 of the 10 stops were canceled for a major street festival.  And the other negativity was the tour guide was in person so no translation options.  We had two guides that would do a schtick in German then in English.  The first gal didn’t have much to say but asked for any questions. -there weren’t any- The second gal rambled on but it was impossible to decipher what she said in English.  We opted to get off the tourbus and try to find the street festival.

En route, we stumbled onto a shrine to Michael Jackson.  On the base of the statue of Orlando – a 500 year famous composer- are candles, flowers, notes and music playing MJ’s music.  It was bizarre.  Apparently, when he used to stay in Munich, he stayed in the hotel across from Orlando’s statue.

After a pretzel break -this one with cheese- we stumbled onto the never ending street festival.  We have no idea where it ended because after a mile or so we opted out.  They had the expected beer and food stations.  Plenty of sweet treats.  The Germans love their beer and their sweets.  Candy and ice cream and pastries can be accessed everywhere.  Bands played on every block.  We heard country and swing sung in our American tongue.  There were blocks set up with biking obstacle courses.  Another section was dedicated to various nonprofits.  It just rambled on and on.

We ducked out near the English Garden.  The huge park has trails for walking, running, biking and even horseback riding.  We hit the Garden later than we intended and it was starting to get dark.  The park is encircled by plenty of trees and foliage.  And because we didn’t see any street lamps, we decided to find the exit.  I had been told there are plenty of beer gardens within the park.  We found one on our way to the street so enjoyed a local brew.  We ended the night at Salicito’s, an Italian restaurant near our hotel.

I continue to stumble through the language.  I saw this phrase ‘Bitte hier warten‘ on a sign.  I thought it said, ‘bite her warning.‘  It actually means ‘please wait here.‘