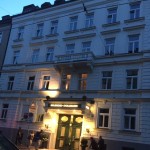 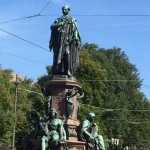 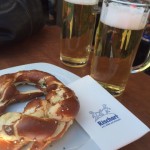 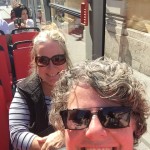 Selfie on the bus 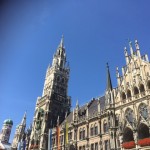 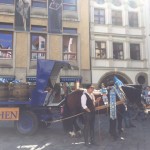 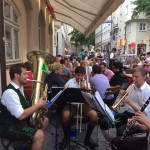 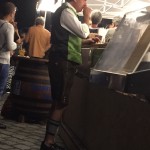 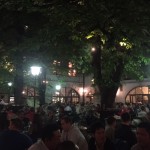 Friday night, my sister Jenny and I hopped on a plane for a little adventure.  The direct flight from Chicago to Munich left forty-five minutes late and arrived twenty minutes early.  With the 9 hour flight and a 7 hour time difference, we arrived foggy to a beautiful, sunny day in Germany.  Although I had dozed for a couple hours in the plane, Jenny hadn’t had any sleep.  In our pre-trip plan, she had arranged for a car service to take us from the airport to hotel.  Such a good call!  I wasn’t in any shape to navigate myself anywhere, let alone a foreign country.

We are staying at the Splendid-Dollman.  A sweet boutique hotel on a fairly secluded street.  We are on the second floor.  In the afternoon, we could hear the distant sounds of a beer garden band.  And Sunday morning, I awoke to church bells ringing.  There is also a streetcar that goes by.  As a city gal, I find the noise a gentle soundtrack.  Jenny thinks people should request rooms not on the street.  The hotel let us check-in immediately.  And I was able to take a nice hot shower and perk up a bit.  The pressure was great and the water itself is making my hair very soft.

We decided to power through the fatigue by taking a double decker bus tour of the city.    We wandered from our hotel towards city centre to catch a ride.  We are fortunate that our hotel is right off Maxmillian Street.  The statue of Max, leader of the Bavarians, is a great landmarker for us to get back to our hotel.

I’m already finding out the service people speak little to some English but signage, menus and general communication is German.  Jenny has a German dictionary and a willingness to learn.  I have no-ear-for-language and a polite visitor attitude.  Someone laughed at me for saying ‘danka schoen.’ It appears the ‘schoen’ is overkill.   And I’ve found the locals aren’t terribly welcoming of we Americans.  I’m not talking about our hotel folks or wait staff… who have been lovely!  I mean the people sitting at large communal tables in beer gardens.  I was rejected from joining tables several times.  The only tables we have been able to join were other tourists from other countries.  I don’t think it is me being overly sensitive.  I think there is a dismissiveness of us that I haven’t encountered in other countries.  I’ll continue to assess the local demeanor.

The bus, Stadtrundfahrt City Sightseeing, was a perfect way to passively get the lay of the land. Between the warm sun and the commentary in German and the English translation via headphones, I found myself relaxing into some major head bopping.  I kept jerking myself awake.  About 3pm, we decided a disco nap was a necessity.  We crashed for a few hours and then went out for dinner.

My quest is to have a pretzel everyday.  I had my first at Rischart, a beer garden in city centre.  Rischart is a story above street level with some great people watching.  The pretzel was cut like a sandwich.  It had cream cheese and chives spread.  Later, I worked in a second pretzel at the famous Hofbraunhaus.  It wasn’t as tasty and fairly hard but it went great with the beer.  I’m deviating some what from my usual red wine preference.  I like to have a local experience.  I’ve also tasted the wiener schnitzel, sauerkraut and sausages.  The sauerkraut is amazing!  It has flecks of bacon and isn’t really sour.  I loved it!

And speaking of locals, there are a few lads and lasses wearing their Octoberfest finery.      The fest officially starts next Friday.  The guys wear suede lederhosen with these calf covers not full socks.   And the gals are wearing German frocks with full skirts and pleasant blouses.  Live music is playing everywhere.  It’s a very festive atmosphere here in Munich!