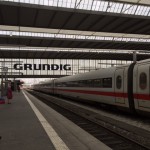 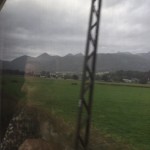 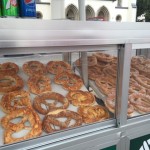 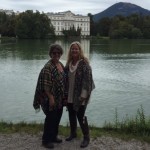 Jenny and me at the Von Trapps 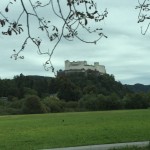 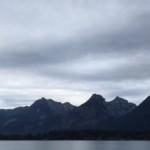 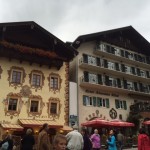 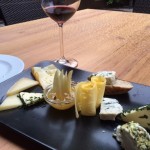 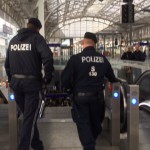 We had decided to visit another new country.  Salzburg, Austria is an hour and half by train from Munich.  We booked our train tickets and tour tickets online.  Early Monday morning, we even felt sassy enough to take the subway to the train. The language barrier is a challenge for ordering off the menu or figuring out complicated subway maps. Well, we did it!  We got from our hotel to the main train station via the ‘U’ or Underground.  And our confidence in navigation ended at the train station.

We were booked on the 8:18am out of Gate 13.  We were there at 8am.  The train never came in.  Announcements were made in German but no one in the Salzburg passenger cluster moved. We all just looked at the empty track collectively willing the train to arrive.   I went up to a few folks in train uniforms to inquire what the issue was.  I was told that we were in the right spot and the train was late.  When the 9:25am train to Budapest started boarding on Gate 12, the alternate side of our platform.  I inquired if we could ride it.  The first stop was Salzburg.  Initially, the gal said ‘no.’  And then she checked her phone talked to a colleague and gave us the official side head nod to board.

The trip was a gentle ride along the countryside with the Alps looming in the increasingly closer distance.  The train was comfortable although the wifi wasn’t functioning.  SIDENOTE:  except for our hotel, we’ve been mostly off the grid.  It’s surprising to me. In my travels in Morocco and Thailand we accessed wifi at restaurants and bars.  Not Germany or Austria!  And a lot of times, the place shows up with locked internet but the establishment insists they don’t have it.  Or it’s only for staff use.  Stingy schmucks!  I’ve seen a lot of businesses owned by Schmucks in Munich.  I wonder what past family member tainted that name forever.

Once we were in Salzburg, we heard Germany had closed its borders.  It’s probably the reason the 8:18am from Salzburg never arrived.  And maybe, it’s our fault for not knowing the language.  Maybe there were announcements suggesting we not leave the country. But come on!  How about a travel agent coming on the track platform to explain the situation??  We certainly wouldn’t have boarded the train if we knew there was political duress.

Before our intimate experience with the refugee crisis, we did see Salzburg, hometown to Mozart and the filming of “The Sound of Music.”  There are several “Sound of Music” (SOM) tours covering the six film locations in Salzburg.  We opted for a city and lake tour.  We   booked with Panoramic Tours.  The first part was a private van tour with an English speaking tour guide.  It was just us and a mom and daughter from Australia.  They also were currently vacationing in Munich. Our tour guide didn’t understand our growing duress about not being able to get back to Germany.  She was a Russian ‘making the English‘ with a German accent.  She suggested in her canned narrative that we stay through Thursday for the fresh market at Mirabella Plaza.  Our responses were groans of hoping that we weren’t still here in Salzburg.

The one hour city tour was meh.  At one point, she drove into a parking lot and gave us a history lesson.  It was odd.  Here’s what I picked up…

Salz means salt.  Burg means medieval walled city or fortress.  Salzburg was founded around the salt mines and has been an independent city primarily run by a Catholic leader, different archbishops.  There are well-established monasteries of monks and nuns.  The abbey used in SOM is active, huge and housing only seven nuns.  We did travel to the Von Trapp house from SOM.  Originally, it was built as a palace.  Currently, it is used as a scientific think tank.  Symposiums are held there for scientists.  It’s not open to the public.  The closest we could get was this across-the-lake-shot.

After the hour van tour, the Aussies nervously headed to the train station.  We had received intel that the border would be closed for a twelve hour period.  And at this point, we naively hoped that our travel plans of leaving at 8pm would be unaffected.

So, we boarded a bus for a four hour Alps and lake tour.  Our guide spoke German first and English second as he narrated the four hour excursion.  We drove past two lakes and many Bavarian villages.  The houses and businesses have that sweet Gingerbread cottage look.  Shutters and flower boxes made everything look enchanting.  We saw gondolas taking people up the mountains too.  As part of our tour, we boarded a boat on St. Wolfgang Lake.  Although it was windy and drizzly, the view of the Alps from being on the lake was breathtaking.  We got off the boat at St. Wolfgang village, the birthplace of Mozart’s mother.  This village was particularly charming.  And despite being a part of a bus tour, St. Wolfgang felt pretty non-touristy.  It started raining so we found shelter at

a restaurant and had a glass of cabernet and the ‘small‘ cheese tray of local cheeses.  Delicious and serene!  I would highly recommend taking the Alps and lake tour but on a day that Germany hasn’t closed its borders.

We got to the train station at about 6:20pm.  In the lobby area were a few hundred refugees listening to a spokesperson shouting directives from a megaphone.  As we walked into the station, the mass crowd of refugees started moving to the escalators. At the escalators were twenty, well-armed police denying them access.  The refugees were all ages.  I saw a small child on a man’s shoulders.  There were film crews filming the chaos.  The protest, at this point, was just verbal.  Yet, the large presence of angry people was palpable. The refugees were shouting demands to go up the escalator and board the train to Munich.  Yes, our town of Munich was the desired destination for these hundreds of refugees.

Although Salzburg had a Red Cross tent set up, Munich has been doing a better job of welcoming the Syrian people escaping from their war torn country.  Over the weekend, Munich had taken in 40,000 refugees.  Not only the excessive number of refugees but also the knowledge that ISIS terrorists were infiltrating Europe under the guise of being refugees had closed Germany’s borders.

At Jenny’s suggestion, we ducked into the train ticket office.  A kind and equally terrified ticket agent assisted us.  We asked to rebook our ticket on the 6:56pm train to Munich.  She did it and then bravely escorted us through the mob to the base of the escalators.  She explained to the officers that we had tickets to Munich.  One wanted to check our passports.  The other scoffed at him and pushed us onto the escalator.  It’s a horrible feeling having hundreds of people watch you being given access to something they desperately want.  I couldn’t look back only forward to the second line of defense, another twenty police officers were at the top of the escalator.

Once on the platform, we stood with a couple dozen folks anxiously waiting for the train to pull into the station.  We observed a few refugees had come up other escalators, climbed down to the train tracks, crossed over the tracks and climbed back up to our platform.  So, now we had a larger threat.  We already anticipated that when the train pulled into the station that the mob was going to try to force its way through two lines of police, up the escalator, onto the platform and into the train.  Now, we knew they could also come up other escalators and get to the train going to Munich.  Everyone, refugees, tourists, locals, in that station except the police wrongly believed that getting aboard the train to Munich meant being safe.

When the train arrived about 7pm, it was a mad scramble to get on board.  The train was already packed with refugees from Vienna.  And unlike the vocal crowd at the station, these refugees sat in quiet desperation.  The only noise in the car was a crying baby and the murmurs of people trying to be invisible.  Jenny and I took the first two seats we found.  We sat across from a young Australian couple that we wouldn’t meet for an hour but would spend the rest of the night with.

The train pulled out of Salzburg slowly about 7:30pm.  We didn’t get very far.  We were stuck.  Since this train had wifi, Jenny started getting intel from her Jen in Granger, Indiana, that refugees were on the train tracks. It was dark and we couldn’t see what was going on.  We sat for over an hour.  When we finally started going again, we caught a glimpse of refugees being bussed away.   The refugee family across from us looked relieved and celebrated by pulling out some food.  Their relief was short-lived. Ten or fifteen minutes later we pulled into a train station.  There were police on the platforms.  Train officials came through the cars.  They were racially profiling the passengers.  The Aussies, Jenny and me were abruptly asked to get off the train.  We were to board another train to Munich and this refugee packed train was returning to Austria. The entire 1.5 hour trip would end up taking 4+ hours.

I’ve never had such mixed emotions.  I had gone the gamut in a few hours:  nervous, frightened, annoyed, guilty, ashamed, spoiled, relieved, exhausted.  I was heading to a glass of red wine and a nice comfy hotel room,  Where were all these refugees heading?  And what needs to happen to help these families get to safety?  It’s an overwhelming situation that seems more manageable reading about it from a USA distance.  Looking into the actual faces, hundreds of them, and seeing human desperation and misery is devastating.