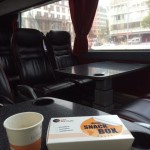 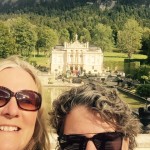 Jenny and me at Schloss 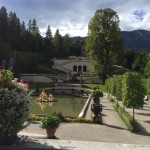 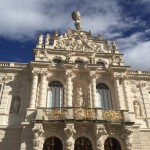 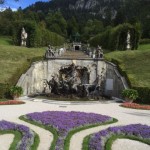 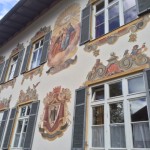 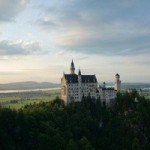 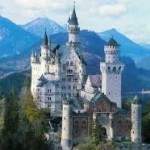 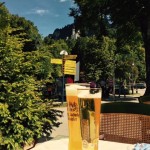 Beer to castle (see it in the corner?) route 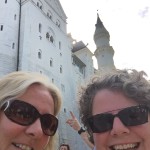 Jenny and me storming the castle 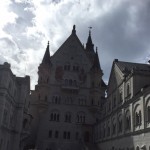 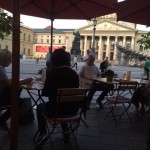 View of the opera house

Our last day in Germany was a day to feel like royalty.  We booked the VIP castle tour with Grayline Bus Tour.  The VIP tour included a luxury coach, free wi-fi and snacks.  We splurged!  We ended up being in a nicer bus than anticipated.   Munich’s professional soccer team, FC Bayern, was in Athens playing a game so we were using their bus.  The leather seats made the atmosphere pretty plush.  The bus aided the royalty feeling.  At every stop, people were taking pictures of the bus and of us until they realized we weren’t the soccer players.

Our tour group size was small, only 16 people, 14 English-speaking and 2 German-speaking.  Our fantastic guide was Francesca.  She presented information in English and then German.  Our best guide yet!  She had a friendly demeanor and a firm grasp of the history about King Ludwig II (1845-1886).  The plan was to visit 2 of the 3 castles he built during his reign over Bavaria.

Before Germany was a republic state, it had a monarchy system.  Prussia was the north.  Bavaria was the south.  Francesca told us the country still is culturally divided.  The northerners negatively refer to Bavaria folks as farmers.  And the south calls the north ‘fishheads.’  Munich itself means ‘monk.’  The monks were here before the city was founded.  And more importantly, they are responsible for the beer.  They made the ‘liquid bread’ for advent and lent. They would drink it during fasting times. It gained popularity outside the monasteries.  And today, Munich has six very successful breweries serving up liquid bread locally and globally.  The oldest is Augustine’s.  In addition, Munich is an international city and home to many corporate headquarters.  It’s the second most expense place to live in Europe after London.

On the way to our first stop, we learned Mad King Lugwig started his reign at 18 years old.  He decided very quickly he didn’t like politics.  And left town for his dad’s hunting cabin in the Alps.  Near there, he built Schloss Linderhof.  Schloss means ‘palace.‘  And for a palace, this one is small.  It’s two stories.  The first floor is the kitchen and servant quarters.  The second floor has only a few rooms, a music room, a dining room, the throne room, the mirror room and one gigantic bedroom.  Ludwig didn’t like people so there are no bedrooms for visitors.  The dining room has a ‘magic table.‘  The table is like a dumb waiter.  It would be set with food and then cranked up to the second floor.  This way Ludwig wouldn’t have to mingle with the staff.

The palace is over-the-top in porcelain and gold knick-knacks.  Ludwig seemed to have two obsessions:  the composer Richard Wagner and french culture.  Ludwig was a huge supporter of Wagner’s operas.  In both of his places, many huge tapestries depicting Wagner’s work are featured.  And Ludwig even built grottos in both places as a homage to Wagner’s stories.  He also was a Francophile.  And the opulent rooms are plastered with portraits of French figures in history.  His house like his life was excessive.  He would sleep during the day and wander the grounds in the night.  He was addicted to morphine for his rotting teeth.  When the 6’4 man mysteriously drowned at the age of 42, he was 600 pounds with three teeth.

En route to the more famous, Neuschwanstein Castle, which would be the inspiration for Disney’s iconic castle, we stopped in the little town of Oberammergau.  This Bavarian village has many houses painted with pictures of fairytale characters.  Back in the day, these painted pictures were status symbols of wealth.  The village is most famous for its production of the PASSION PLAY.  In the 1630s to ward off the ‘black death’, the village promised God they would annually perform an 8.5 hour production of the PASSION PLAY.  The ‘black death’ went away and the village continued their pledge annually, then biannually, eventually every five years and currently on the decade.  The next show will be performed in 2020.  The cast will be all local actors with three men playing Jesus over the 3.5 month run.  Tickets are expensive and anticipated to sellout this year.  It sounds like a cool experience but I doubt I could get a press pass.

I learned the difference between a palace and a castle during my UK trip last year.  A palace is to impress visitors.  A castle is a fortress made to rule. Opposite to his fancy palace, Ludwig built Neuschwanstein like a Medieval castle. It can be seen from great distances from its perch in the Alps. Getting to the castle takes effort.  A shuttle van or horse cart can get guests close but there is still a walk to the castle and then there are 600 steps in the castle. Avid FitBit people, Jenny and I declined the van and cart offers to walk the entire steep mile after enjoying a beer with our Kasspatzle mit Rostwiebein (cheesy noodles) and Bratwurst mit Kartoffelsalat (sausages and potato salad).

From far away, the castle has a romantic allure that Disney totally capitalized on.  Up close, it’s less enchanting.  It’s all size, no show.  For one, it’s unfinished.  Ludwig died before completing it.  Using a guided audio tour, we walked through what was completed. We saw the kitchen and servant quarters.  The throne room had grand murals of saints.  Kings were believed to be saints appointed by God.  And like Linderhof, there was only one bedroom, Ludwig’s,  This one was also done in blue, the King’s favorite color.  Unlike his ornate Linderhof master bedroom, this was wooden gothic to the extreme.  Over the top of his bed was several wooden carved spirals.  The room has wall murals of the story of Tristan and Isolde, another Wagner opera.  And besides the grotto inside the castle, the oddest thing was the telephone.  The eccentric Ludwig insisted on having a telephone installed.  And because no one else in Bavaria had a telephone, he had one installed in his mom’s castle.  It was a weirder act because she only lived in the palace down the street and he didn’t like her.

Our castle tour got us back to Munich at 7pm.  We celebrated record-breaking steps with a glass of wine at the Spatenhaus an der Opera.  It is directly across from the opera house made famous by Wagner’s biggest premieres.  The Oktoberfest crowd of an anticipated 6.5 million seem to be arriving already because the beer gardens were full.  We wandered back to our hood and revisited a couple places we went to our first night.  We had come full circle.

Danka, Munich!  It’s been fun getting to know you.

SIDENOTE to Cridlin and Richard:  Beer served at Oktoberfest is 9% alcohol, a higher percentage than in town.  Last year, 5,500 phones were left behind.  ENJOY!  Be careful and safe! 🙂