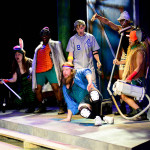 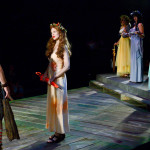 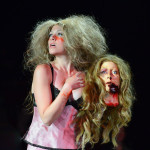 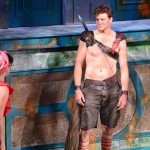 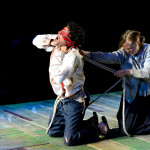 The Hypocrites present the world premiere of ALL OUR TRAGIC.

Adapter and director Sean Graney has taken the 32 surviving Greek tragedies and compiled them into a 12 hour epic narrative.  The notion is overwhelming.  The execution is impressive.  Graney’s 1200 page script (there is a comedy reference to the length during the show) is actualized by an energetic cast of twenty-three.  The commitment by Graney, by cast, by stagehands, by volunteers, and even by the audience is monumental.  This swirling saga of cataclysm is a unique yet exhausting theatrical marathon.

Graney plots out the accelerated mythology class using the seven sisters as touchstones.  His stories weave around the misfortunate marriages of these sisters.  Each sister carries an umbrella.  Throughout the time travel and era shifts, seeing the umbrellas and counting down the sisters’ deaths from eldest to youngest helps put a framework around this humongous Greek history lesson.  Their marital woes set the stage for murder, incest, and war.

Graney also uses minstrel narrators (Erin Myers, Lauren Vogel, Kate Carson-Groner) as tour guides on this adventure.  The amusing trio kick off scenes establishing dates and locations.  They often accompany the action by singing and playing various instruments.  The ladies serve an important function in announcing breaks and the duration of these segments.  Carson-Groner, in particular, has this cherubic charm.  She regularly makes hilarious comments about the tasty food during the intermission (And she’s right. it was tasty and plentiful!).

In a show about tragedy, blood flows liberally.  Killings happen frequently.  Fight choreographer and ensemble member Ryan Bourque produces multiple skirmishes.  Bourque has the cast playing iron man war.  They attack each other tirelessly.  With the length of the show, the energetic battle scenes probably help the cast keep spry with the frequency and ferocity of their occurrences.  Costume Designer Alison Siple keeps the raging alliances distinct with a variety of uniforms.  At one point, she dresses a rebel force called ‘the comptrollers‘ like rambunctious kids using household items for their war games.  Siple definitely aids the show with pageantry.  Her eclectic fashion show is an ode to ancient past and 1950s past. The sisters first appear in traditional flowing Grecian dresses.  Later, they are dressed in crinoline-poofed skirts and high heels.

To counter the death toll, Graney injects plenty of humor into his slaughterhouse.  In the first part, the magnetic Walter Briggs (Herakles) carries around a children’s book.  Briggs longs to be included as a hero in the book.  The deadpan Geoff Button (Prometheus) continually shuts down Briggs’ notions of grandeur.  This playful banter helps lighten the mood in the heavy heaps of devastation    Fast forward 8 hours and mega centuries, Briggs, now as Agamemnon, and Tien Doman (Klytaimnestra) have a riotous encounter.  After a hot, steamy second, Doman hilariously puts back on her panties.  And she and Briggs have a verbal spat over “wife vs spare wife.”  Hysterical!

The entire cast is phenomenal.  They are a whirlwind of creative innovation.  They regularly transform into completely different personas.  Their commitment to the roles, the text, the time is marveling.  A problem with four-plays-in-one is a standout moment can get lost.  Literally, in the 11th hour, much of the first hour is a blur.  There were several memorable metamorphosis. Even with the amount of characters and the extensive storylines, I still recall some specifics from beginning to end. Ezekiel Sulkes goes from bashful goat/man to brooding teen. Luce Metrius plays an arrogant Jason and later an honorable Achilles.  Briggs starts out over-the-top heroic and later over-the-top drag.  Emily Casey is this adorable bubbling-blowing-one-armed-skipping-girl then she unhinges as this dark-demented-beauty.  Doman begins the show as the haughty eldest sister.  Throughout the show, she changes roles and personalities but Doman’s comedic timing remains stellar.  Erin Barlow plays multiple sullen, strong girls until she morphs into Hermione.  In this final role, she is a living Barbie doll.  Her flirty pink self would be detested by her previous grounded characters.  John Taflan, not only goes from regal to creepy in his Epidus to Pylades conversion, he has a heart-breaking transfiguration as Epidus.

Reading interviews about Graney, this project sounds like his white whale.  And he did it!  He adapted and directed a 12-hour homage to the Greek tragedies.  It is undeniably an amazing feat.  And the 12-hour experience is obviously Graney’s preference.  Right now, this version has more of an overall gimmick appeal.  It’s like riding the tallest roller coaster.  It’s perfect for a theatrical thrill-seeker.  For ALL OUR TRAGIC to endure over time, parts should be re-worked, tightened up and perfected.  For example, the end of the Trojan War seemed under-written and under-rehearsed.  This is forgivable and forgettable in a 12-hour story telling.  Yet, if I’m going to ride this ride again, I need it to be wondrous for every minute of the adventure.  I also wasn’t crazy about the ending.  After I’ve seen each cast member killed at least three times over a twelve hour period, I don’t want to clap along as the ensemble sings in a ‘one to grow on‘ ending.  I want to thunderously applaud the effort and make my hasty exit out of Grief-town.

There is a lot to love about Graney’s Greek-fest.  The show is portioned off into segments.  A person can purchase the 12-hour immersion package on Saturday or Sunday or see the show in quarters over four consecutive Fridays or Mondays.  I saw it in its entirety on Saturday.  I have experienced 6 hour operas.  I’ve seen three plays in one day.  I had never experienced 12 hours of concentrated folklore before Graney’s colossal catastrophe tribute.  As an audience member, I feel like I crossed some mythical finish-line.  I did it!  I did it! I did it!  The accomplishment seems t-shirt worthy: “I survived 12 hours of tragedy”

Adapted and directed by Sean Graney