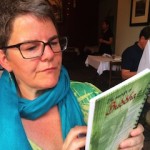 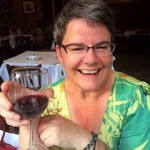 I brought my spec pickers back together.  Two years ago, I had Steve, Bill and Roger meet me to pick a finalist from the three pairs of glasses I had preselected.  They disliked them all.  I ended up trying on over 50 pairs to find the ones I very satisfactorily wore for the last couple years.  So, I wrangled their assistance again yesterday.  I had a new prescription. And Pearle Vision had a 2 for 1 special.  It was go time.  So, I requested the team return for another vision quest.  The optical crew sans Roger (he’s in NYC) brought their opinionated selves.

What I found out last eyeglass picking season was long-term friends have absolutely nothing to gain or lose in this process.  They don’t get a commission by pushing a higher end frame.  And they won’t hurt my feelings in criticizing how I look because it’s pre-purchase.  It really is all about me and making me look good.

I have big eyebrows, tiny eyes, a round face and a prominent nose without a bridge.  A lot of glasses look horrific on me.  Some, I can reject independently.  I mean bad is bad! Some, I need a nudge to get them off my face.

Steve was late for this soiree. He tried to wade gently into the process.  Our time was limited.  We had two pairs to select and lunch to eat.  So, I pressed Steve to bring it.

Bill had already helped me eliminate a couple dozen.  His method of dismissal is either abrupt laughter or finishing the statement “I don’t like the —- (color, shape, bejewel)—- on you.”  Steve thoughtfully examines my face.  He either says a firm  ‘no,‘ shakes his head no or just hands me another pair of glasses.

We ended up with these two.  I’ve never purchased two pairs at the same time.  It was fun choosing two different styles.  I think the larger pair are more bookish and the other is sassy yet sophisticated.